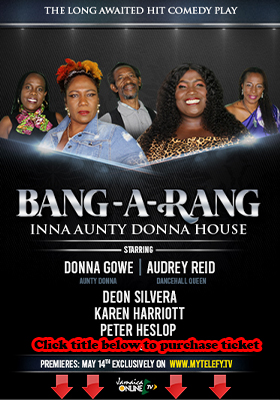 You need to login to add your review. Click here to login.

In my honest opinion, the play wasn't really that funny not very engaging I fell asleep, for me the play only got interesting when 'Pam' came on the scene she was so hilarious lively raw love her! She also had me tearing up at the end would have loved seeing her been arrested by 2 officers on scene to make it more interesting cause we could only hear her voice from behind the scenes. It was too much talking and sitting down not much action why I say it was not engaging. It would of been nice to see more of Mr sar & Donna together I loved the part when he was hugging her up that part made me chuckle & when she asked if him hi weh her tings!? Audrey is a star but didn't too like the British twang (from a British) it's the few words she said in patwa had me smiling.Was expecting a more upbeat character for Donna it was too mellow compared to who we see on live who is usually lively raw and extremely funny. The end was a bit cut and dry it ended to abrupt I had to say is that it!
Marie Malcolm at 2021-05-17
Good job auntie Donna and it's a reality when you trust your friends and they are planning on to bring you down.but thank God for your miserable and nosey sister Audrey.But Auntie all you concern about is if mr.sar did give it away.well done though for the first time in your acting .
Desirae T at 2021-05-16
I was expecting more laughter and I thought it was too long but, overall a good watch. Aunty Donna well done
Sydonie Sutherland at 2021-05-16
Aunty Donna was a natural and did a sterling job. However the plot waa weak, it wasn't funny at all, not at all Jamaican. It was not engaging and if I had not spent good money I would have switched off long time. Need to keep the patois and keep it authentic,even Aunty Donna live is more watchable than this.
Jennifer D Elliott at 2021-05-16
Great acting debut Auntie Donna. Great storyline, the maid was very hilarious. Next time would love more laughter.
Nadine Baker at 2021-05-15

You don't have permission to watch movie

Enjoy watching movies at the tip of your fingers! Just click "Submit" and have the pleasure of viewing at 3,000 kyats for 30 days!